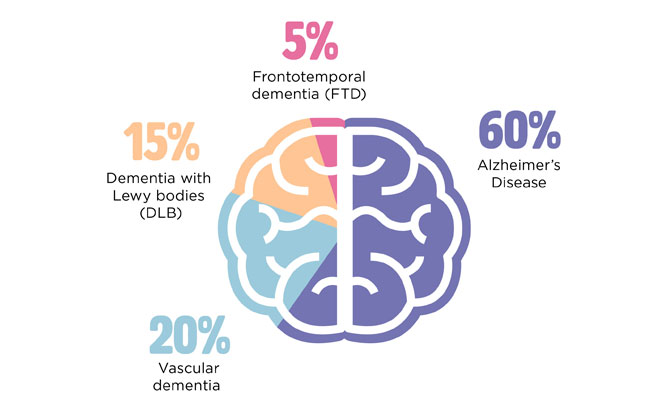 Dementia is a scary condition. But avoiding the warning signs will not help it go away and an early diagnosis gives the sufferer the best opportunity to live a full and active life with dementia.

Our infographic developed with data and advice from the NHS, Alzheimer’s Society, Age UK & Alzheimer’s Research UK provides an easy to understand guide to spotting the early warning signs of Dementia. Feel free to share it, print it or embed in on your website. Together we can raise awareness of Dementia symptoms and promote the benefits of early diagnosis.

Here are some of the common symptoms to look out for if you think you or a loved one might be suffering with early symptoms of Dementia.

Dementia is a progressive disorder that affects how your brain works and in particular the ability to remember, think and reason. It is not a disease in itself – but a group of symptoms that may accompany a number of diseases that affect the brain. – AgeUK

There are 4 main forms and causes of Dementia symptoms:

Its possible for a person to suffer more than one cause of Dementia, this is known as “Mixed Dementia

£26 billion – the current cost of dementia in the UK[ii]

Before starting a conversation with someone you’re concerned about, the Alzheimer’s Society suggests that you ask yourself the following questions:

[iv] Lakey, L (2009) Counting the cost: Caring for people with dementia on hospital wards published by the Alzheimer’s Society

[v] Matthews, F et al (2013). A two-decade comparison of prevalence of dementia in individuals aged 65 years and older from three geographical areas of England on behalf of the Medical Research Council Cognitive Function and Ageing Collaboration.